The First City of Capitalism: Silver’s Time to Shine

Powered by an intricate set of 22 dams, 140 mills churned out silver. It was an impressive feat of engineering given the time. Slaves were forced to carry 25 loads of 100-pound sacks per day.

At an elevation of 13,000 feet, death was a frequent occurrence as pneumonia and respiratory infections were rampant. Legend says you could build a bridge from Potosi to Madrid with all the silver mined, and one back with bones of miners.

The discovery of Cerro Rico (Spanish for “Rich Mountain”) turned a tiny Peruvian village into the 4th largest city in the Christian world in 70 years.

Coined the “first city of capitalism” Potosi was home to the world’s richest silver deposit. Over a 200-year period, 1.4 billion ounces of silver was mined from the region.

At its peak in the 17th century, over 150,000 Peruvians, African slaves, and Spanish settlers called Potosi home. At the time, the population of Potosi was larger than London, Milan, or Seville.

Silver has no shortage of war and fortune making stories.

To the JP Morgan short position…

The booms and busts of silver have truly been exceptional, putting the testicular fortitude of even strongest silver bugs to the test. 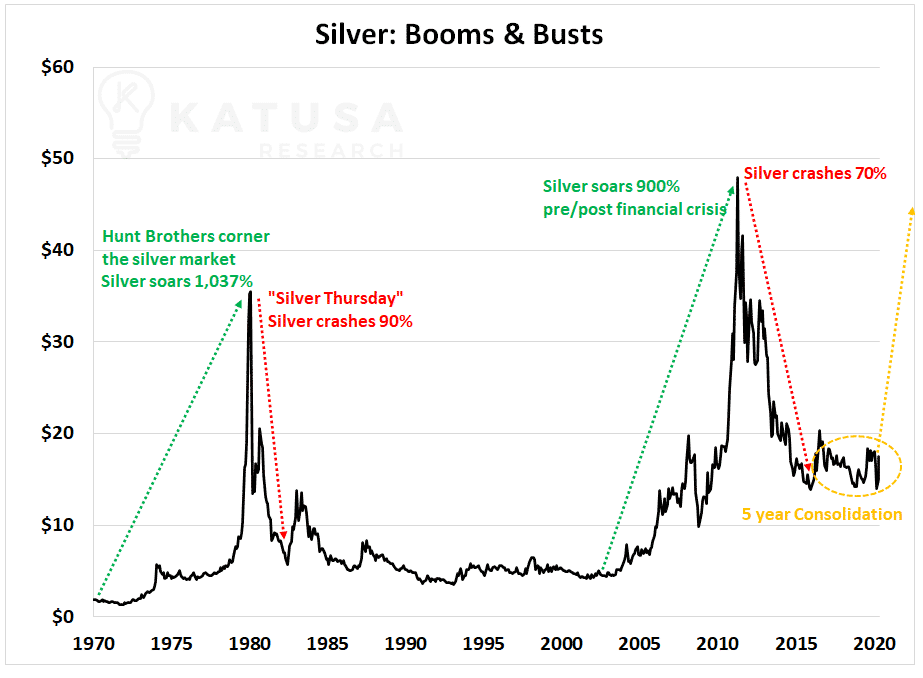 Much to the rage of silver bugs, while gold has steadily grinded higher over the past few years, silver was left behind. The gold spot price is up nearly 40% YTD while silver spot is treading water. 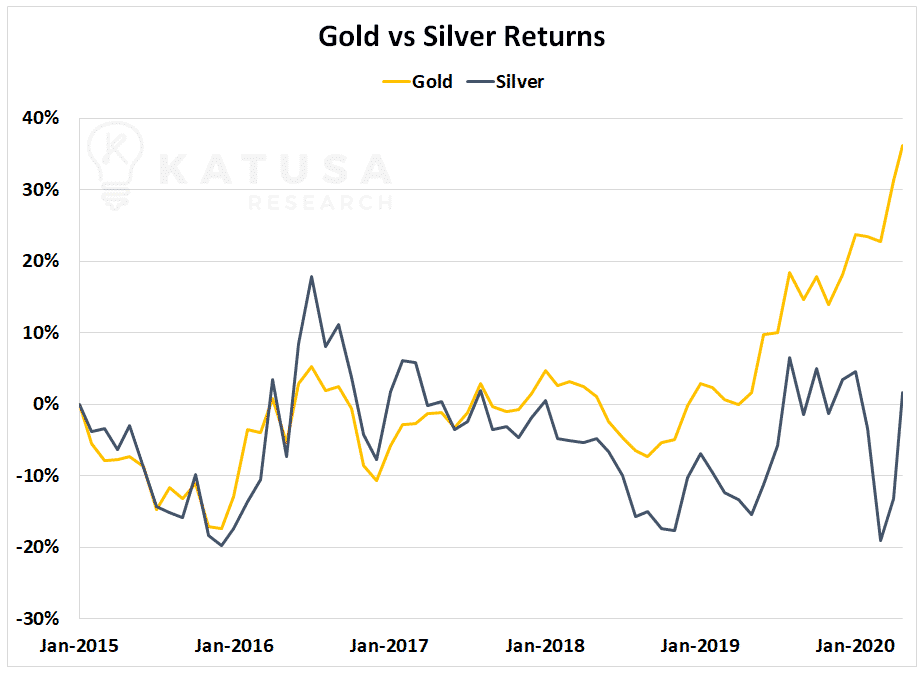 Change may be afoot.

The “anything it takes” economic policy of central banks and governments around the world is shaking things up across the spectrum of investment types.

Since March 23, 2020 silver has been one of the top-performing major commodities, outperforming gold by a significant margin.

What the Silver CoT Charts Are Telling Us

The hedge fund and managed money crowd are not all-in on silver. Below is a chart which shows the Commitment of Traders non-commercial long positioning for silver. 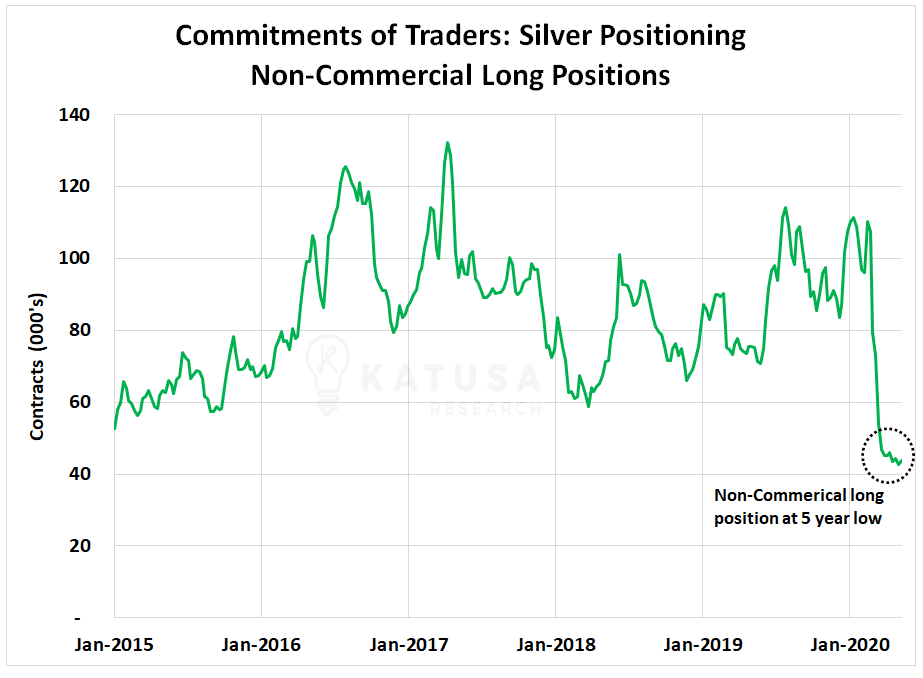 It’s logical to think that when the commercial group has a large short position, prices are likely near a high point. Below is the commercial positioning.

While all this point to support for higher prices, the only question that matters is this:

Will Silver and Silver Stocks Take Off?

So far, they haven’t.

Below is the returns comparison so far since March 23rd, 2020 (the meltdown lows)… 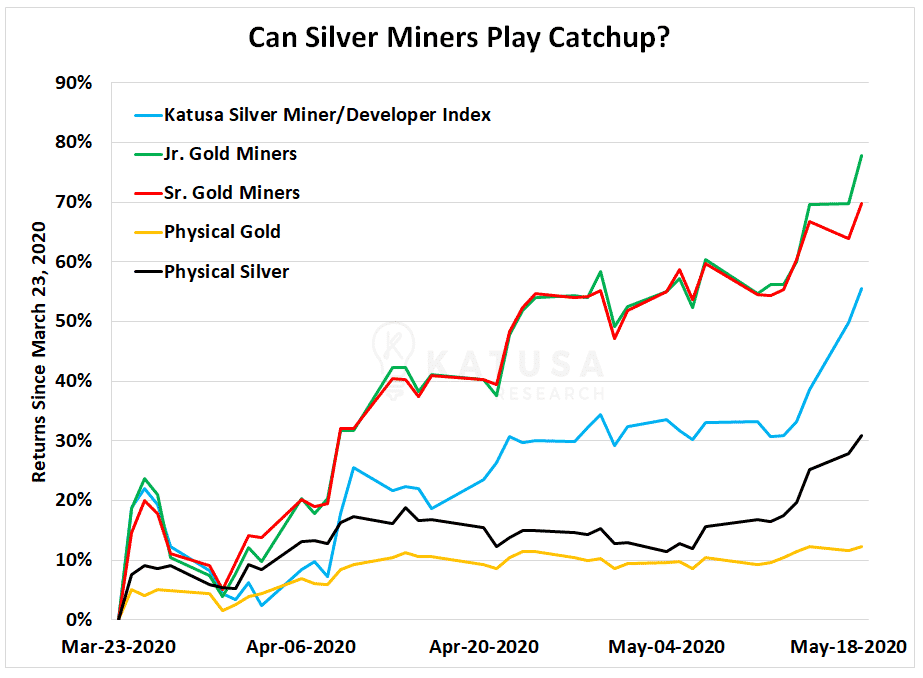 Below is a chart which shows large silver producers from 2009 to 2011, during the last big run. You’ll see that while silver surged 300%, producers at the time were up 500% or more. Even Fresnillo, the world’s largest silver producer was up over 500%. Many junior producers were up over 1,000% during the run. 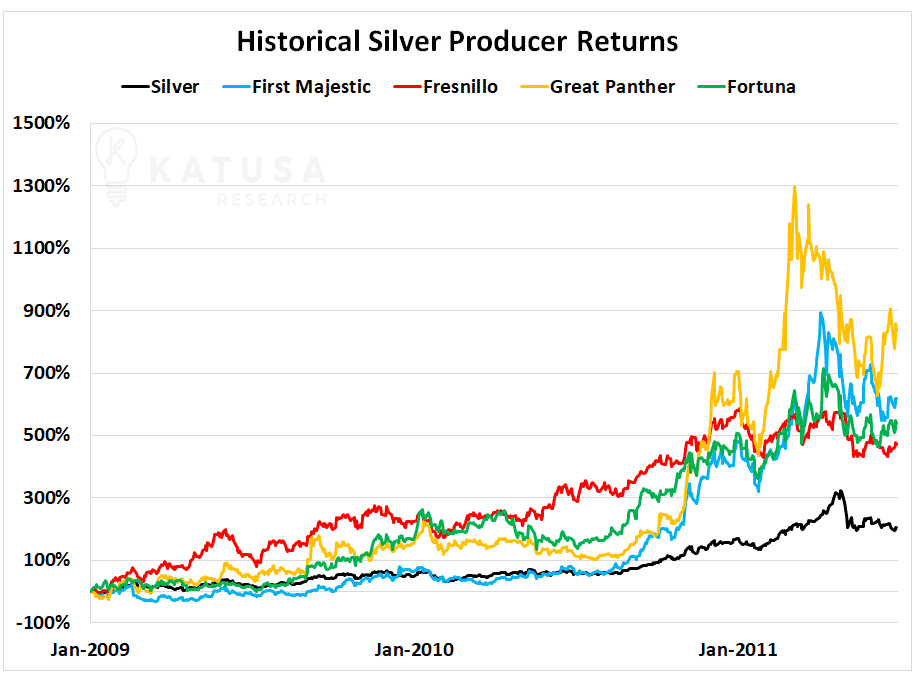 You can see how the right silver stocks can produce mind-boggling leveraged gains over the spot price of silver.

Who are the Largest Silver Producers?

After the Goldcorp merger, Newmont is projected to be the world’s largest silver producer.

Many investors might find it odd that a “gold” company churns out the most silver, but it’s true. Below is a chart which shows the expected top 5 silver producers in 2020.

What’s Next for Silver?

Silver is useful both at the industrial level and as a store of value, just not to the extent as gold. This has the potential to be a double whammy for prices over the next 3 to 24 months.

In theory, depreciating currencies should help stores of value like silver and gold.

At the same time, the “anything it takes to keep the economy going” approach by the central banks is positive for industrial uses. It’s not unreasonable to think that silver could catch a bid. And soar.

As always in natural resource speculations,

I believe the US SWAP lines will play a huge role in mine production and company valuation moving forward. 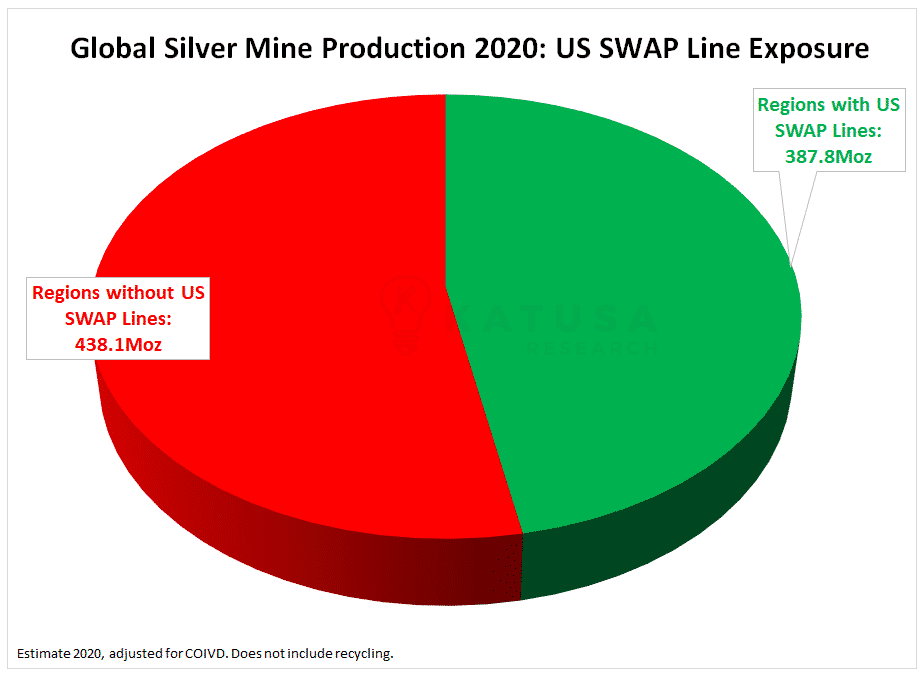 My largest current core position – a gold and silver producer – is up 102% over our portfolio cost base in Katusa’s Resource Opportunities. Just to catch up to its peers, at today’s gold prices over $1,700, this stock could easily trade 50-75% higher.

Another takeover candidate is up over 100% since its March lows.

And our two most recent additions to the KRO portfolio (both energy stocks) are up 118% (on a free ride, and paying a fat dividend) and up 43% (also on a free ride, paying a juicy dividend)… are doing stellar.

If you’ve missed out because you were on the sidelines, don’t fret.

I’m very close to pulling the trigger on a monster deal for subscribers.

There will be no marketing. No promotion to jazz you up about it. There’s only one chance to get into what could be the biggest gold deal of 2020.

If I can pull it off, I’ll be committing a significant dollar amount to be one of the lead orders.

And the only way you can get in the deal, is to be in the room before I send out the alert.

Click here to learn more about becoming a member to Katusa’s Resource Opportunities.

Welcome to the Slowdown: Moves to Make Ahead of Stagflation

How to Profit From Carbonomics